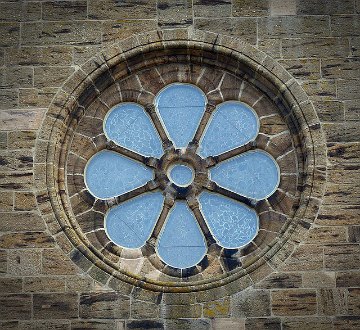 Hmmm. Healing dreams. Yeah. Lotsa those…And so many dreams that have come in full stories, like they downloaded into my brain, chapter by chapter. I would wake up and record them for later use.

I still have “dream books” sequestered in my studio somewhere. Must track them down! I used to record my dreams nightly, something I stuck to for a few years. Since then I have experienced lucid dreaming, where I become aware in the dream of what is occurring and how it relates to me in my conscious life. Then I make efforts to change things if I don’t like how the dream is playing out.

Sometimes I can – like how it happened in Healing Power Dreams #1  and in #2 dream with the lucid invocation of “Jesus” – and sometimes I can’t, like when the invocation didn’t get the desired results. But I’m aware that I’m trying. I awaken with a sense of righteous accomplishment whenever I’ve succeeded!

Dreaming Of The House You Grew Up In – Er – Which One!

And as for dreaming of the house I grew up in… Since my father worked for a large construction firm – the Foundation Company of Canada – which, as the name implies, was in charge of all the initial pouring of concrete for dams, airports, mines and such other large concerns, we moved almost yearly (once three times in a year!)

Our travels took us to towns or cities all over Canada, but mostly from Canada’s Midwest through to Ontario, Quebec and the Maritime provinces. I lived in a myriad of houses and/or apartments as I was growing up. Then I continued to move about, what with college and other endeavors necessitating changes of residence.

At last count I had attended twenty-two schools since starting 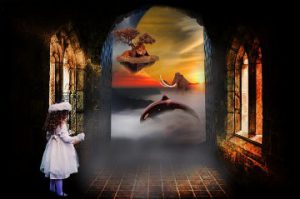 Every time I revisit one of them, I always end up finding hidden doors that lead to unexpected and fascinating rooms filled with jewels or mountains of beautifully bound first edition books, or passages to remarkable places, like unexpected underground Xanadu lands!

When I was just four we lived in a tiny town in Manitoba where my dad was in charge of building the forms into which the concrete would be poured for a dam being erected locally. My playmates, all at least a year older than I was, suddenly were nowhere to be found on one September morning.

We had just come back from a Winnipeg visit to family and I bawled like the child I was when I learned they had all gone to school, deserting me.

Now, since this was a little French-speaking Catholic town, the only 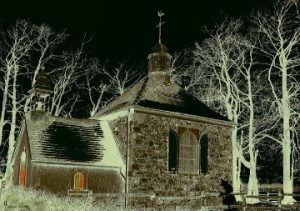 local school for kindergarten and elementary students was taught in a carbuncle annex of a gothic-looking old church.

Really old church! In retrospect, it looked like something out of an Edgar Allen Poe story… You know – eerie! The enormous brooding edifice built with dark grey local stone that seemed to perspire, looked like the loveliest place in the world to me.

It was filled with my friends.

Well, a young novice found me crying on the steps of the carbuncle and in 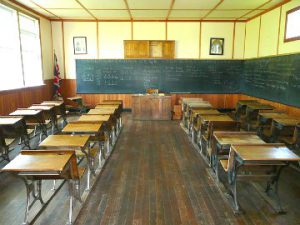 moments I was being led inside to a dilapidated “Little House On The Prairie” school desk, complete with nib pen and inkwell, and introduced me to an old nun with pince-nez perched on the bridge of her nose.

Wait. Old? Sister Anthony Agathe was ancient, all crooked and bent with skin folded almost into pleats like a human version of a Shar-Pei.

I gazed up at her, finding her beautiful, marveling at her crystalline blue eyes almost buried in smile lines, as she handed me a treasure-filled pencil case and lined newsprint pad.

A few of my friends wiggled fingers at me shyly, while the young novice warned them to be quiet with a shushing gesture, forefinger held upright over her pursed lips, and passed me a small box of crayons.

Okay! This I understood! Shut up and get to work.

“Work” that I loved!

Drawing and coloring were daily pastimes for me. Boy, those were the 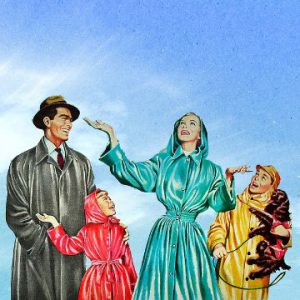 days. Children were sent outside to play and told to be home in time for lunch, or for dinner, or before dark. As long as those rules were followed, no worries!

Thus, by the time the sweet, young novice walked me home after school, my mom had suffered no worries, trusting that I was fine and simply out playing.

And it was arranged that I could come and go from the classroom as I pleased with no official enrollment, since we knew that my dad’s part of the work at the dam would soon be done and we would be moving on to Gaspé, Québec, on the east coast of the country.

I mostly went to school and stayed. I mean, it was more fun to draw and color with a room full of other kids than at the kitchen or coffee tables at home. The other kids were okay with my loose schedule and of course the sisters had firm control over classroom behavior!

I learned the alphabet and to write some French words (I spoke a kind of pidgin Quebecois with my friends) but mostly that place and those nuns got imprinted into my dreamscape. And that’s what I was getting to, so please pardon the digression.

We are back to dreams.

Often I find myself in a dream where I am sitting at that little desk tracing a finger through names of children carved starting from sometime in the 1800s, when that church was built. The student’s backs are always to me, and the nuns waft around like big ravens, their robes billowing in ways I’m sure they never did in real life.

Their faces are always in shadow.

Ravens And Swans, Darkness Into Light

In one dream I raised my hand and asked “Puis-je aller aux toilettes, Sœur?” She said “oui”. 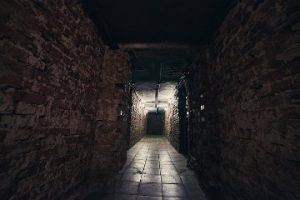 the foot of the stairs, and dark passageways lead off in many directions. The bathroom sported a rust-stained old pull-chain toilet lit by one dim pull-chain light bulb.

That’s pretty much how I remember it from real life, so I had this strong sense of déjà-vu in the dream.

I put down the toilet seat, sat upon it, and pulled markers (which didn’t exist at the time) out of the pocket of my school tunic (which had also been provided by the nuns back in the real school) and began to draw symbols on the wall.

They were drippy symbols, though, because the stone inner walls were 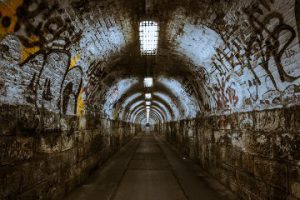 sweating as copiously as they had done when I was four. Ick! But those slick walls knocked me into lucidity and I recognized where I was.

I recalled that in other dreams of places once familiar I would often find doors or passages to curious and sometimes wondrous things, so I got up to check out the basement corridors rather than try to draw symbols on a wet wall. (And why would I be doing that, anyway!)

Noticing I was now in some kind of weird close-fitting jumpsuit, I realized my dream body had shifted into the adult me, and appreciated that I would be safer as a grownup exploring creepy corridors than as a four-year-old.

Turning toward the nearest, I was startled by a sharp whistle – the kind you achieve using a couple of fingers in your mouth. Not that I ever could.

But… Looking to the top of the stairs that normally led to a little lunch room, I saw a cluster of nuns with crow faces under their wimples peering down at me and making gestures that clearly urged me not to explore but to come back up the stairs.

They were pretty strange looking so I wasn’t eager to follow their advice. Then they started changing, turning pearly white, becoming swan-like, and growing large fluffy wings. Bright light shone down as though the sun were rising behind 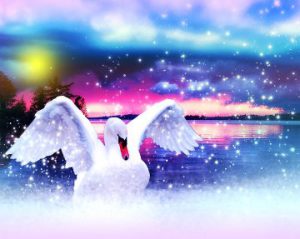 Halos sprouted around their crowns, looking like their heads had burst into silvery flames. Their eyes shone with golden light and they started moving their wings.

Not flapping, but lifting them gently up and up until they shrunk into the bright sky and disappeared.

The cramped basement stairway morphed into a fine gilded staircase that wound upward and into the light. I started climbing and woke up.

And as I wrote this all kinds of strange dreams I’ve had began tumbling through my consciousness, demanding attention. Perusing those memories now, maybe to write about later?